Are you an old Tiger?

Springbank Football & Netball Club has a long and proud history of success and when you play for our great Club you became part of the Springbank community and Old Tiger family.

Springbank Football & Netball Club is a cornerstone institution of the Springbank community having a strong tradition that is built on team work and unity much of which can be attributed to the loyalty and support of our past players, officials and supporters.

The Old Tigers represent the lifelong mateship playing for the black and yellow jumper and netball bib is about.

The core objectives of the Old Tigers are:

Each year the Old Tigers hold social functions to ensure the friendships established at Springbank Football & Netball Club are lifelong no matter how many games you played or what level you player at. Once a Tiger you are always a Tiger and become part of our Old Tiger family.

We invite you to update your details or register for the first time. We are hoping to grow the support of players from all eras, which will provide the momentum to further develop the scope of the Old Tigers.

The Old Tigers provide an import financial support to the Springbank Football & Netball Club and we encourage all past players to financially support, and keep connected with the Club via Old Tiger Membership for $55 or My Old Number/Player Membership for $110. Both membership categories can be purchased Online simply by clicking on the following link. 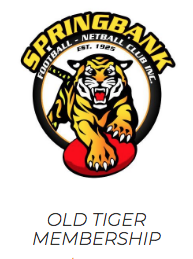 Your on-going financial support is greatly appreciated and acknowledged by the Committee and your fellow Old Tigers.

We look forward to seeing you at the Club during the season with Old Tigers Days planned for our home game against Dunnstown on 27th April 2019.

If so we want you to connect back with us so we can share the Tiger story with you.

Fill in the form and we will be in contact.